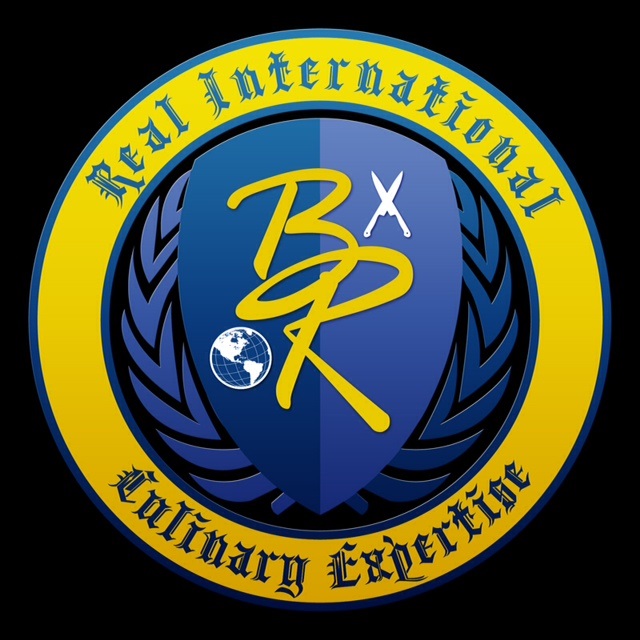 Born and raised in New Jersey, Derrick had a pretty normal childhood leading into adolescence. That is until the tragic passing of his father before his thirteenth birthday. What he lacked in a father figure, his mother more than made up for. Mr. Smith was raised by an intelligent and courageous woman that worked tirelessly to set him on the right path. After a promising start in baseball and bodybuilding who could have predicted the turn of events that lead Mr Smith in the path to becoming a celebrated chef. Perhaps inspired by a childhood memory of a gourmet hotdog dinner Derrick meticulously prepared for his mother and father spurred by their delight and enthusiasm for his simple yet inspired creation. Be that as it may he had no idea of what was to come many years later. Now, with over 27 years of professional culinary management experience, training and food preparation he is Committed to pursuing his passion for food.

Chef Derrick received culinary training at the New York Restaurant School in Manhattan, specializing in Culinary Arts, Restaurant Management and Bartending. Derrick has continued his education through certifications and training. He has held titles such as Saucier, Lead Sauté, Executive Chef, Sous Chef, Assistant Manager, Banquet Sous Chef and is well adept at handling the control and flow of food from kitchen to table. Derrick has been a Restaurant chef for multiple award-winning restaurants. Some call him Worldly, ambitious and highly skilled in various ethnic cuisines with a strong understanding of flavor profiles. Mr. Smith started his culinary career in what some say is an odd way. Starting his career in a cook position with McDonald’s, in the late eighties, working his way up to become shift manager while still in his teens. Many opportunities came in his youth that helped build his strengths in the food and beverage industry.

As a young man Derrick wore many hats and had many talents. In addition to his culinary skill, and athleticism, Mr Smith found himself with the gift of dance and was spotted in the legendary Platinum nightclub, under the name Derrick X. A few short years later he was offered opportunities that would eventually parlay into becoming a celebrity promoter, hosting and promoting some of New Jersey & New York Cities top venues, under a new alias, such as Hunka Bunka, Surf Club, Park Avenue Country Club, Mirage, Light Lounge, Le Zinc, Dama, Systems, China Club, Lotus, Sound Factory, One51, Copacabana, Latin Quarters and Planet Hollywood, just to name a few. Mr. Smith spent seventeen years in the nightclub industry rubbing elbows and hosting events for some of the industries elite: Guru,Maya,Usher, Alicia Keys, Jim McEnroe, Jermey Shockey, Busta Rhymes, Jennifer Love Hewitt, Rosie Perez, Beyoncé, Ice T, Coco, Method Man, Red Man, Kevin Garnett, Madonna and the list continues. Mr Smith was given the opportunity to try his hand at part ownership of an exclusive Manhattan nightclub in the mid nineties. After a few misfortunate circumstances coupled with his lost opportunity at a career in the major leagues, Derrick had an epiphany. He woke up one night to the commercial for “New York Restaurant School”. At the time he didn’t really put it all together but he soon landed back in the kitchens working at a steakhouse and the first Boston Chicken (now Boston market) and without any formal training took the head chicken cutter spot, “Yes that was a thing lol”. That was a turning point in his culinary career as he proceeded to attend the very school he saw that night when he awoke. New York Restaurant School, where he was under the tutelage of Master Chef Booker and a host of others . They say fortune favors the brave. Perhaps Derrick possesses such qualities as he was one of ten out of fifty chosen to stay and work under acclaimed Chef Michael Lomonaco, who at the time was chef of the Legendary Windows On The World & Wild Blue until that fatal day in 2001. Chef Lomonaco also worked for famed LeCirque and 21club. Derrick had the pleasure of shaping his culinary culture between the walls of Windows On The World. Years and memories never to be forgotten. After the tragedies of 2001 Chef Derrick proceeded to work in and out of the industry reaching the title of Executive Chef running three locations before the age of thirty. This however proved to be even to ambitious for Derrick who was still a nightclub dancer/promoter at the time. Eventually it took its toll and Derrick had to step away from all businesses for health reasons. Upon his return to culinary he found himself on the ships in the Pacific Ocean in the early 2000s working for Norwiegin Cruise Lines America as a chef who would get his first taste of the beautiful Islands that he now calls home. Mr Smith left the island only to return a few short years later with a Godly vision and purpose driven determination to succeed in gracing every palate Island wide with the best culinary creations known to all of man kind. After a decade on Island Chef Derrick is ready to bring his creations to the forefront. Mr Smith believes that as a team you achieve much more than having a singular focus and he’s looking forward to introducing new flavors and concepts not only by himself but his esteemed staff of culinary professionals and beyond. Some of the professionals Derrick has a had the pleasure of working alongside include, Austrian Chef, William Schropp of Odeon, 2015 ACF Culinary Chef of the year, Jason Drysdale and Executive Chef Rex York a former pilar of Norwegian Cruise Lines America.

In addition to a host of mentors that helped shape his culinary talent Derrick continues to channel his culinary passion through the delivery of visually appealing, colorful and delicious meals to customers of Hawaii and beyond. Derrick has also catered to a variety of entertainers, athletes, industry executives. Here’s a list of just a few that have enjoyed a delicious dining experience ....

As Blu Rice Inc approaches the launch of its first of many restaurants and more Mr. Smith wants to personally thank you for taking the time to read just a little about a Jersey boy that’s here to put a positive spin on life through God’s Love. A pep in everyone’s step with exciting venues, concepts and always with the flavors that will have you slapping ya neighbor. One Need Not Say Duck!

"Instead of changing the system that would influence people, Change the people who will influence the system" - The Bible

“Perfection is not attainable, but if we chase perfection we can catch excellence.” -Vince Lombardi 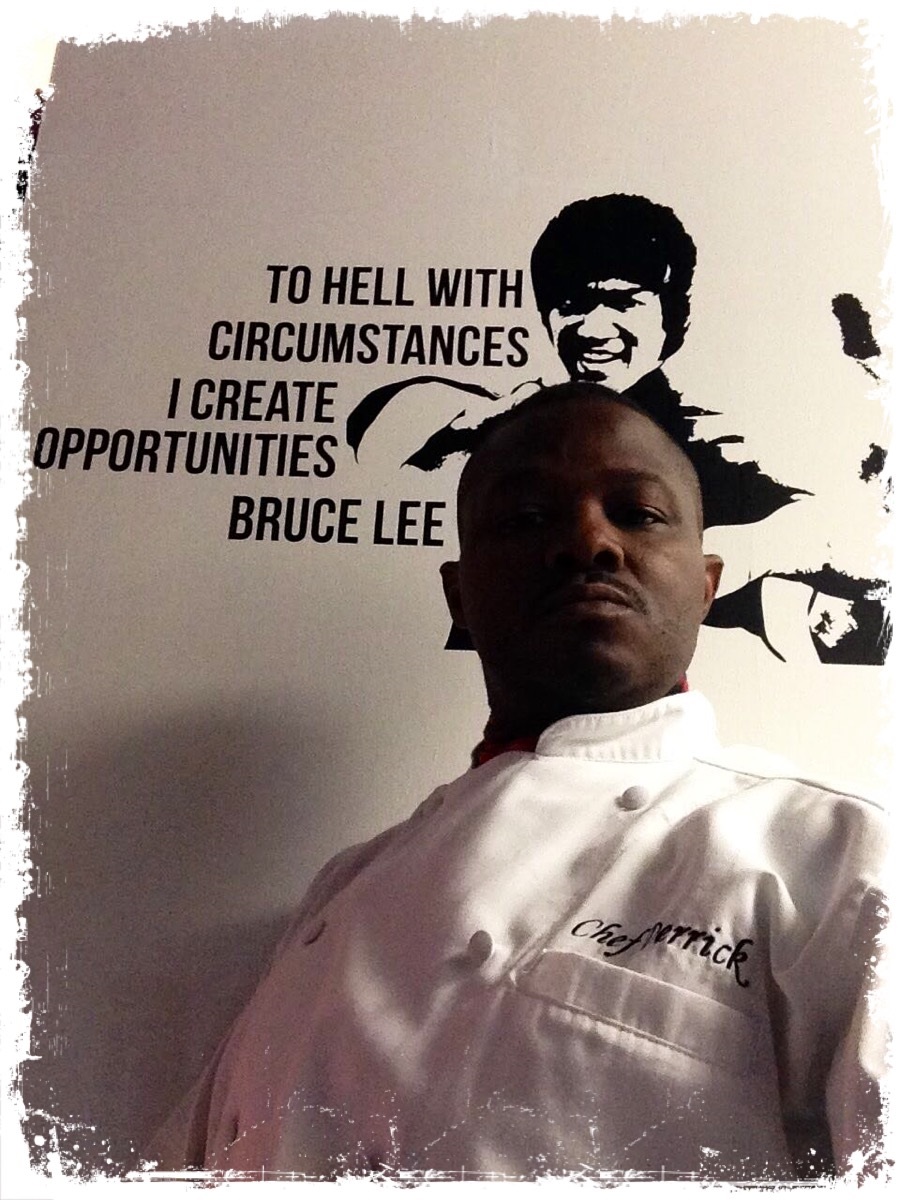 Deidra was born in Upstate New York. At a young age her parents decided to relocate the family to Tennessee where She lived out her childhood and teenage years with her two other siblings. Deidra Smith had a relatively normal childhood. She excelled academically throughout her elementary and high school schools years. Growing up Deidra found a passion for the arts. She was encouraged by her family and friends from a young age to embrace her passion and practice her hand at her preferred medium, “painting”. Deidra Graduated with honors in 2006 and continued her schooling at Walters State Community College as a Fine/Studio Arts major. Through her time in college Deidra worked in retail and customer service. She was a quick leaner and found herself being moved up in higher positions with more responsibility, quickly.

Deidra met Derrick Smith in 2008 during her final semester At W.S.C.C while working as Cash Office Manager at Hobby Lobby. They started dating soon after meeting. Love has no sense of time and It was less than a year later that they decided to take a huge leap and move to Hawaii and start a life together. Derrick had previous knowledge of the islands while working as a chef on a number of cruise lines. Less than 24 hours after arriving in Hawaii, Deidra went from Ms.Fancher to Mrs. Smith. By 2011 Blu Rice Inc. came to life. Deidra was determined to invest in her husbands vision and work together to bring something different and long inspired to Hawaii and eventually the world. Deidra moved to Hawaii with experience in customer service but no real knowledge in the food and beverage industry other than the agricultural aspect that was apart of her southern upbringing. Upon moving to Hawaii Deidra realized that she needed to integrate herself and make connections as an official resident and it would be a slow process when acquiring work in her field of study. It was a blessing that living in Honolulu provided opportunities for work in her field of customer service experience. Her previous experience and willingness to learn allowed her to integrate herself into the business that would give her knowledge she could apply to her own business. She has spent the last 10 years working predominately with coffee and food. She has gained further experience as acting Store Manager for two separate cafes. Together the Smiths and members of our Blu Rice team have spent the last 8 years of their marriage developing their business and connecting with like minded and equally talented individuals with a matching passion for the same quality of service and cuisine as Blu Rice Inc. 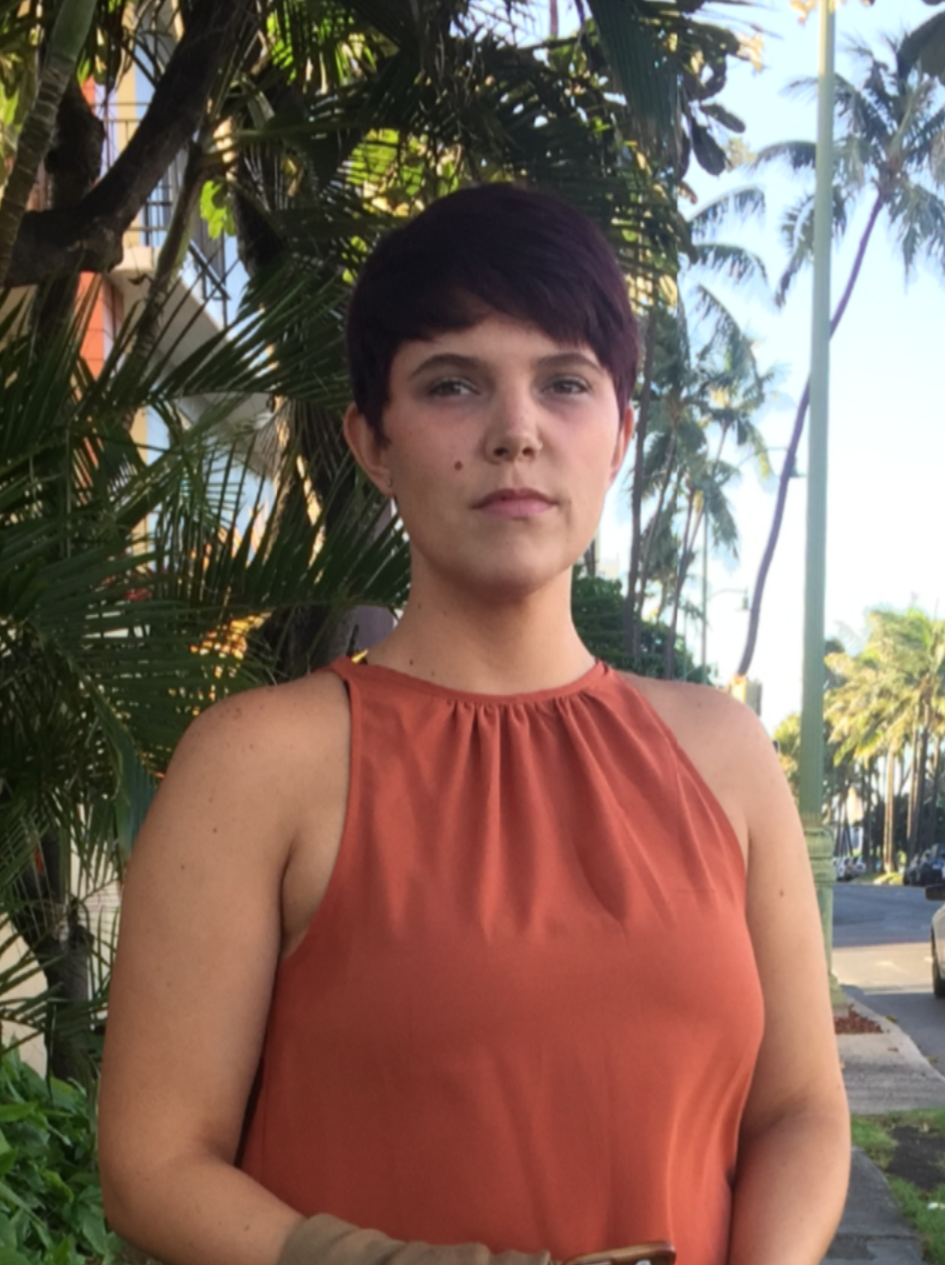 Rory obtained his Bachelor of Business Administration and Finance degree from the University of Hawaii at Mano, Honolulu Hawaii. He is a member for the business executives of tomorrow. Mr. Tsunezumi currently resides off island and plans to join the team once we have established our footing in the restaurant community.

Overall jack of all trades. Mr. Westbrook arrived to the islands of Hawaii in the late 70's and decided to call it home. Entering the world of real estate in the eighties focusing mainly on timeshares. This is where Mr. Westbrook would spend the bulk of his career mastering said art form. After a few years of being passing acquaintances a likeminded friendship between Mr. Westbrook and Mr. Smith emerged.  Naturally these two individuals joined forces on what has become the offical first Blu Rice Inc restaurant establishement called Blu Dogz Hawaii. 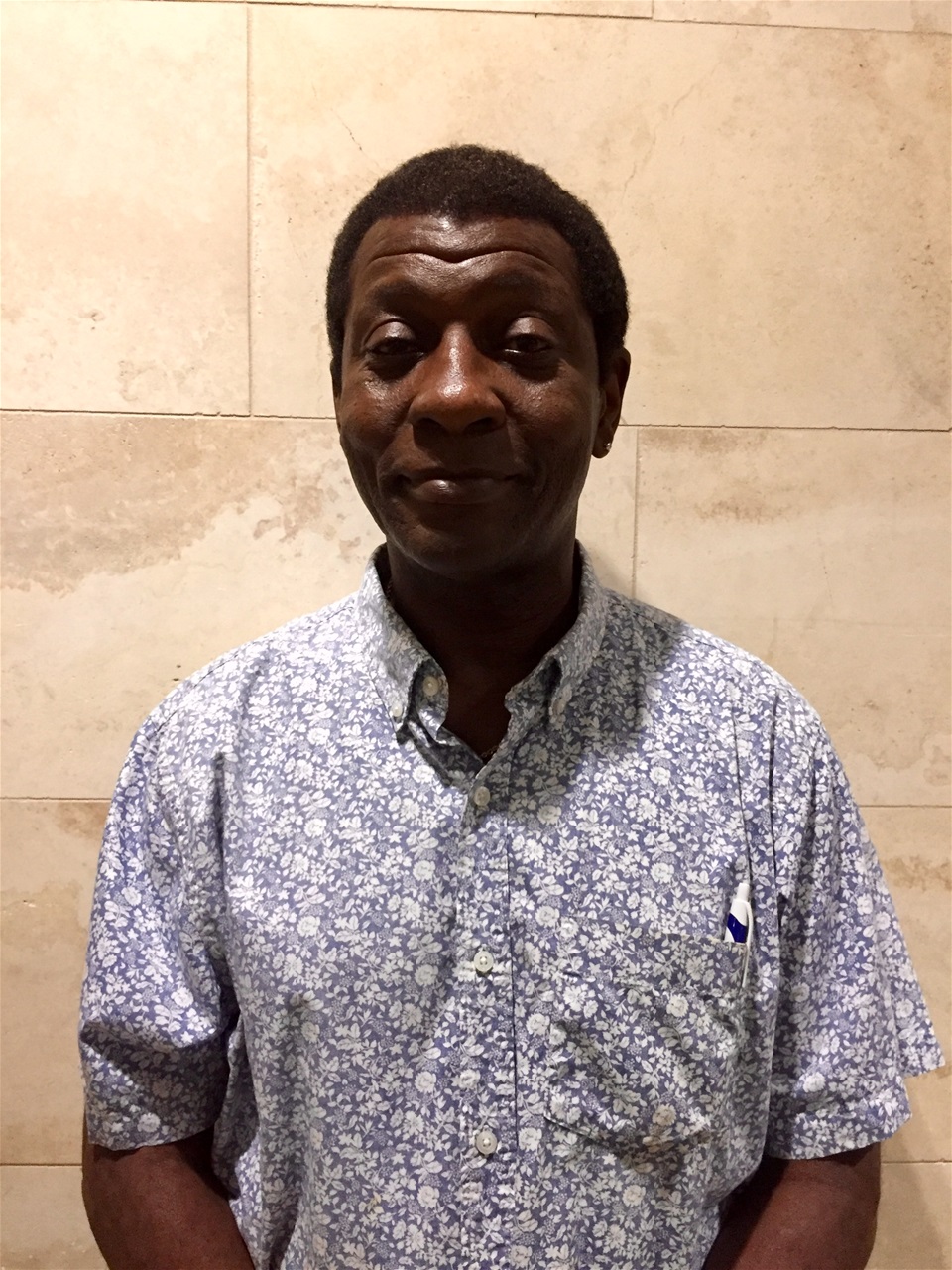